Skip to content
Consequences of Biblical Translations: Only as Good as the Original

Home » The Bible and Beyond » Blog » Consequences of Biblical Translations: Only as Good as the Original

Consequences of Biblical Translations: Only as Good as the Original 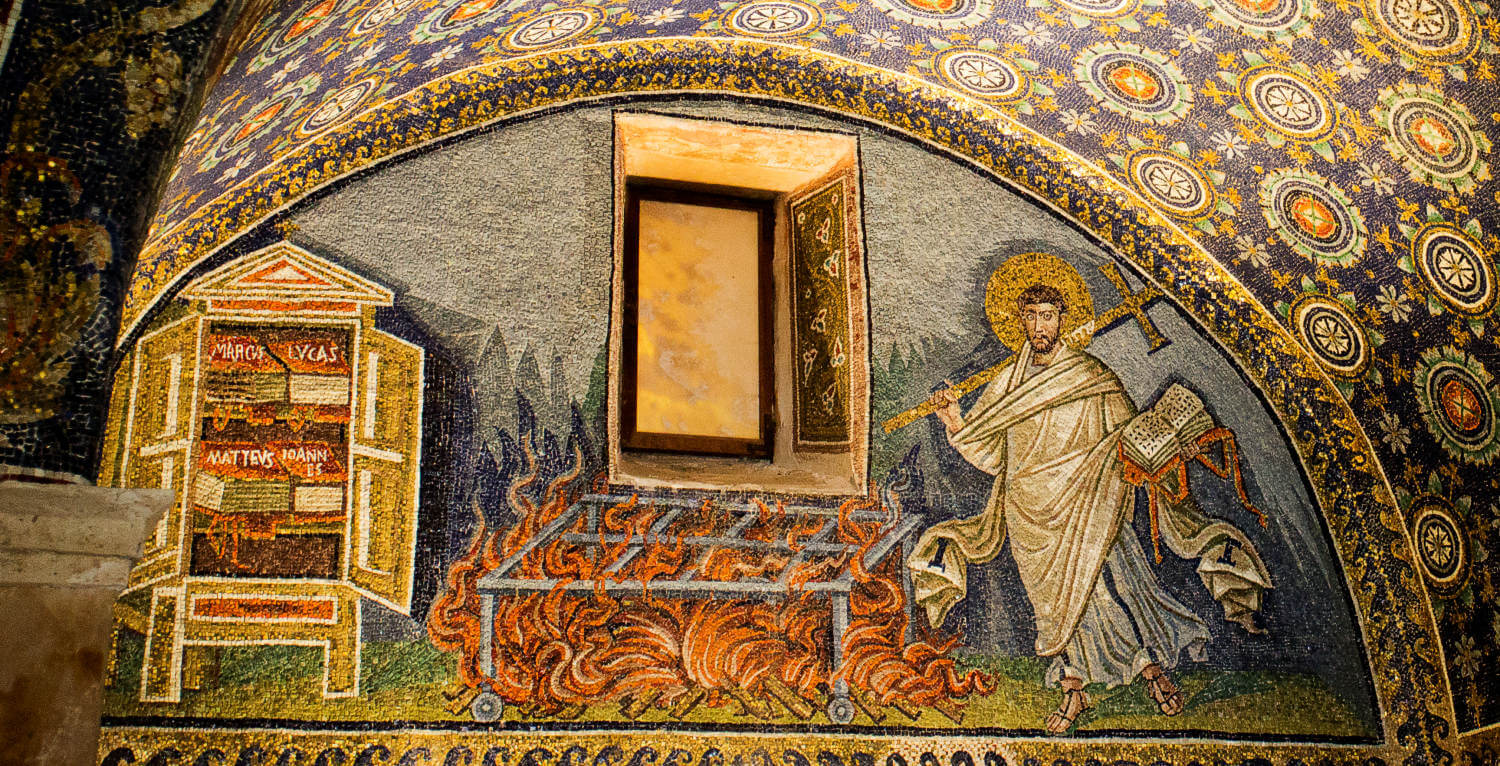 This mosaic from the Mausoleum of Galla Pacidia (5th century) in Ravenna, Italy, depicts a cabinet with four codices, one for each gospel. Complete Bibles or New Testaments were very rare. The mosaic represents the normal situation—individual codices kept in a cabinet, not bookcases which had not been invented. This is an imperial church and represents the codices belonging to the church.  Click image for a closeup of the cabinet. Photo by smsx_supp_612.

From Hebrew to Greek

Israel took a different path. In the first two centuries BCE, the large Jewish community in Alexandria, Egypt produced a translation of the Hebrew holy writings in Greek. This process took place over a long period and the quality of the translations varies. According to legend, the Egyptian king ordered seventy rabbis to each independently translate the complete Hebrew Scriptures into Greek. Upon examination, each of the separate translations were identical. The name Septuagint (abbreviated LXX) derives from the number of translators. The miracle attests to the g-d of Israel’s approval, while overcoming the problem upon which Islam focuses, that it is a human translation. The legend guarantees that the revealer approved this translation.

For early followers of Jesus Anointed and later Christians, the LXX is Scripture (literally in Greek “The Writings”).

Christians followed Israel’s practice. Translations of New Testament writings began appearing in the late third century CE in Latin, Syriac, and Coptic. Our earliest evidence consists of translations of the gospels. The canon of the New Testament was not yet established. Many of the Coptic writings discovered at Nag Hamadi were translations from the Greek, for example, the Gospel of Thomas.

In 382 Pope Damacus commissioned Jerome to translate the complete Bible into Latin to replace the Old Latin version. Jerome’s translation, called the Vulgate (meaning “commonly used”), became THE BIBLE for western Christianity throughout the Middle Ages until the sixteenth century. Despite papal approval, Jerome’s translation was not without controversy. Augustine expressed reservations and continued to use the Old Latin versions.

So strong was the authority of the Latin Vulgate, that translations into the new emerging European vernaculars were controversial and prohibited by the popes. Translating the Bible into the vernacular became a major issue fomenting the Reformation.

Two elements conspired to overturn the primacy of the Vulgate. First was the invention of the printing press (1450) which changed everything religiously, culturally, politically, and any way you can imagine. (Elizabeth L Eisenstein,. The Printing Press as an Agent of Change, Communications and Cultural Transformations in Early Modern Europe. 2 vols. New York: Cambridge University Press, 1979.) The printing press made possible universal literacy. Ancient literacy rates averaged around ten percent in urban areas, lower in rural. The ancients knew how to teach everyone to read, but what would they read, when everything was copied by hand? The printing press solved that problem. Literacy rates soared after its invention. The number of books available rapidly increased. Before Guttenberg, the number of manuscripts produced each year numbered in the low thousands. In the first fifty years after printing’s invention, 9,000,000 books were distributed.

The rapid rise in literacy and the availability of books coincided with a shift in the religious ethos away from liturgy and towards reading the Bible. The shift placed the Bible at the center of protesting Christianity, not the sacraments as had been true in the medieval period. Without the printing press, the Reformation would have been impossible. As Luther himself said, “Printing is the ultimate gift of God and the greatest one.” The mass printing of Luther’s 95 theses marked the real start the Reformation, not the posting on the Wittenberg church door.

The printer Johann Froben asked the famous humanist scholar Erasmus to produce the first edition of a printed Greek New Testament. He employed the newly developing tools of textual and literary criticism that were being used on classical writings. Erasmus’s Greek New Testament was published in two folio volumes in 1515, with many subsequent editions. The Greek appeared on one page and on the facing page his Latin translation, along with notes. Latin was the language of scholarship. Erasmus’ Greek edition became the standard text, often referred to as textus receptus (the received text).

The scholarship needed to produce a critical edition of the Greek New Testament marks the beginning of biblical scholarship, with grammars and dictionaries, and historical criticism. Scholarship historizes the text making it complex, oblique, and remote. Scholars also ask questions that many find disturbing.

Scholarship enables good translations. Translations create the impression that the text is transparent. The distance created by scholarship, history, and foreign languages disappear. The original appears in a reader’s contemporary language. Moreover, every copy of a book in a print run is identical, whereas no two manuscripts are the same and all manuscripts required correction. This illusion of transparency and fixity creates fundamentalism. Ironically, the printing press produced both biblical scholarship and fundamentalism—initiating an eternal struggle.

Luther took two radical steps when he published his Das Neue Testament Deutzsch (1522). Against papal prohibitions, he translated the New Testament into German and compounded his daring by translating, not the Vulgate, but Erasmus’ Greek New Testament. So dangerous was this act that he did it while in hiding.

After Luther’s translation, others quickly followed, all based on Erasmus’ Greek text. In 1525 Tyndale made the first English translation, for which he was executed for heresy. In 1560 another English Bible appeared, known as the Geneva Bible because it was translated by exiles from Queen Mary’s England living in that city. It quickly established itself as the Protestant English Bible, becoming Shakespeare’s Bible. Fifty years later in 1611 King James authorized a new Bible translation. The Puritans rejected the King James Bible because it was not literal, a word for word translation, in favor of the Geneva Bible.

In reaction to the Protestant translations, the Council of Trent (Roman Catholic, 1545-1563) defined the Vulgate “as authentic,” “sacred and canonical,” forbidding translations from the original languages. This remained in effect until Pius XII’s Divino Afflante Spiritu (1943), which for the first time allowed Catholic scholars to translate from the original languages. The primacy of the Vulgate was maintained for theological issues.