Interested in booking Shirley Paulson or Hal Taussig of Early Christian Texts to speak or present a series or workshop?  Click here for booking information.

A variety of presentations on early Christian texts, including seminars, classes, workshops, and lectures

Presentations and events can be created to work perfectly with your event. If you have a specific topic related to the early Christian texts, be sure to send a message to ask about it. 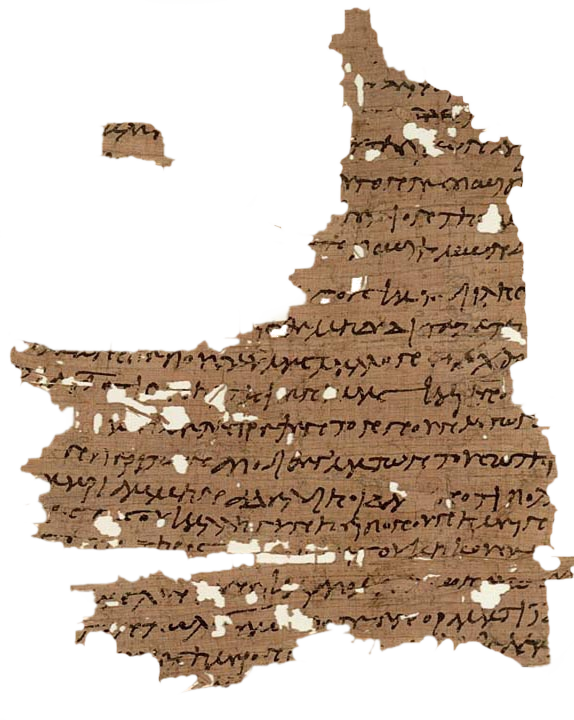 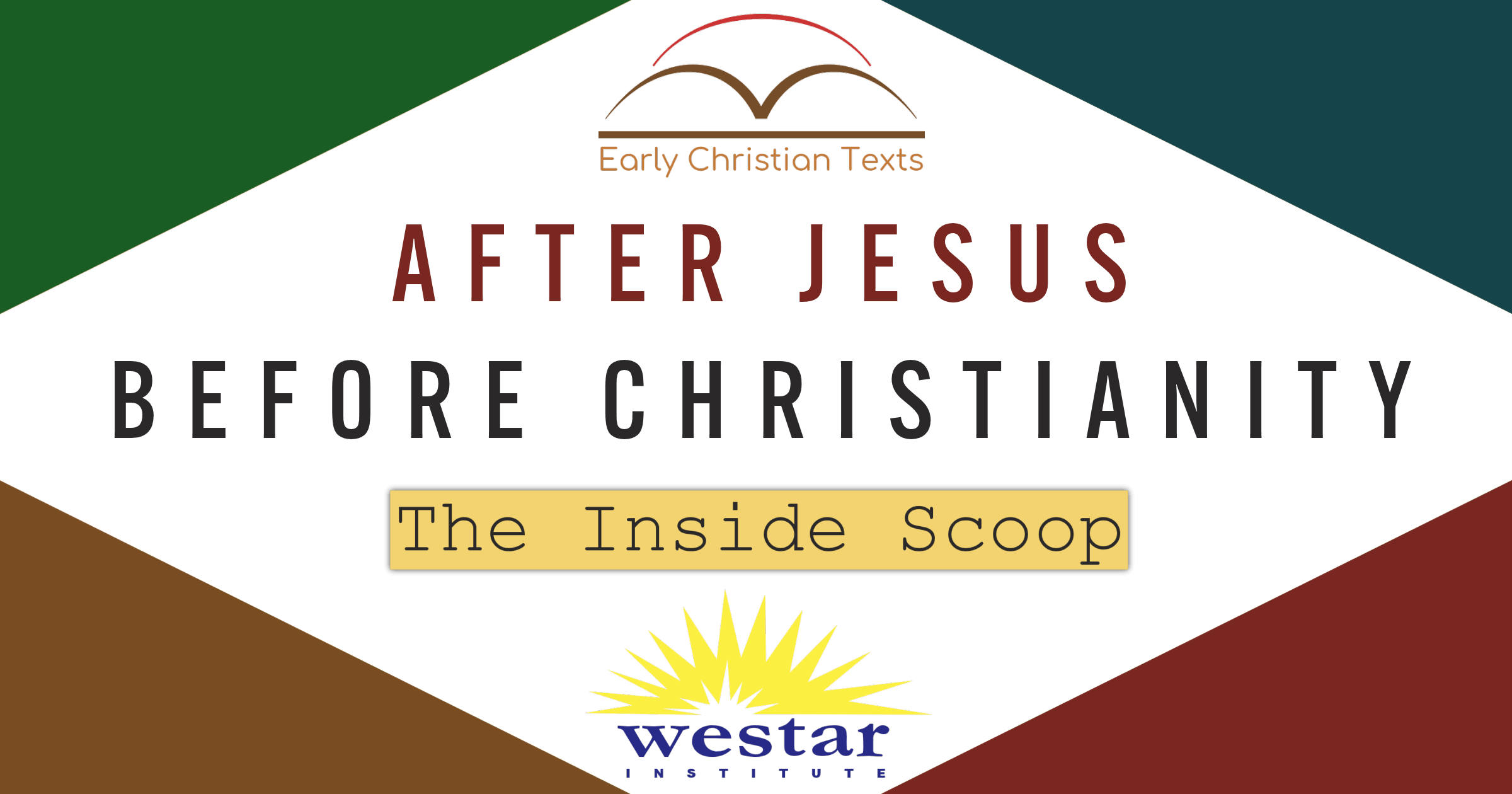 The Inside Scoop on After Jesus Before Christianity

The Inside Scoop on After Jesus Before Christianity is a series of exclusive podcast interviews and follow-up Zoom chats with five of the scholars instrumental in the production of the book, After Jesus Before Christianity. The series is enhanced by open-ended conversations among participants via a special email discussion group. The series runs from January 11 – February 15, 2022. This program is a special gift available only to Early Christian Texts patrons and Westar Institute members. Become a Bible and Beyond patron or a Westar member before January 4 to qualify for this special gift. 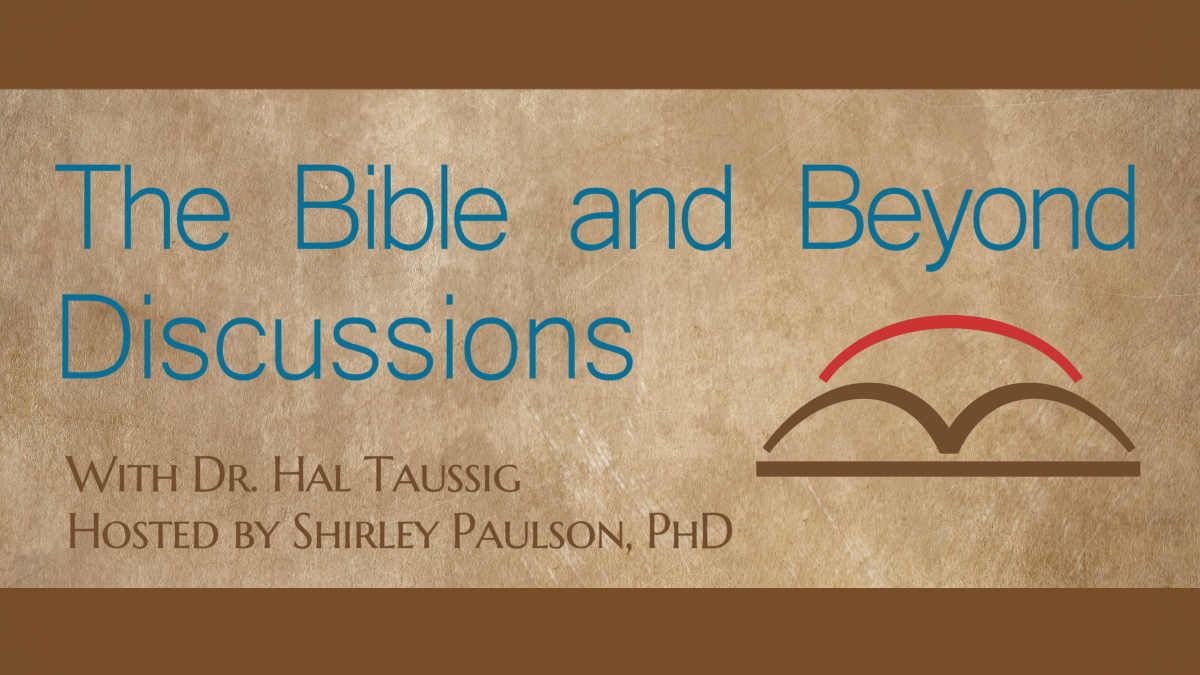 The Bible and Beyond Discussions

Once a month, at 8–9 pm Eastern Time on Monday nights (generally the fourth of the month), Dr. Hal Taussig presents an online discussion of one of the early Christ movement texts.  These discussions, hosted by Shirley Paulson, PhD, begin with a well-framed overview of the particular text, and then participants ask questions and share their own insights about the meanings and potential for these texts.

“This was the best webinar yet. The information was clear and has implications to think about. Shirley Paulson gave the webinar a superb start with her visual easy-going start to invite us into the presentations. Her conversational style is easy to listen to.” — David

Panel Discussion on After Jesus Before Christianity

The Westar Institute is publishing a ground breaking book called After Jesus Before Christianity with HarperOne.  This panel discussion featuring Erin Vearncombe, Brandon Scott, Hal Taussig, Vincent Wimbush, and Elizabeth Theoharis will look at the many provocative conclusions of the book following the eight year study of the Christianity Seminar. Important discussion will include issues related to gender in antiquity , the troubling use of “Gnosticism” in the academy study of religion, and the lack of evidence for a unifying movement later known as Chrisianity.

After Jesus Before Christianity Events presented by the Westar Institute

The new book by Hal Taussig, Erin Vearncombe, and Brandon Scott is now available for pre-order from Harper-Collins.

Lecture One: The Six Biggest Discoveries from After Jesus Before Christianity

This lecture gives an overview of the six most important discoveries laid out in After Jesus Before Christianity.  They are the six major discoveries of the first two centuries CE and as such portray the six most significant happenings in the wide variety of wisdom schools, Anointed communities, supper clubs, Jesus groups, and political movements before Christianity came into existence and after Jesus was crucified.

These discoveries are summarized in the books Chapter One in just one page, and then more thoroughly laid out in chapters 3,4,7,8,9,10,11,12, and 19. This lecture dips lightly into each of these other chapters to give an overview of major six discoveries.

Lecture Two: The Violence of Rome, the Resistance and Creativity of Communities

This lecture lays out the violent culture of Roman power and the ways a wide variety of Jesus peoples resisted the empire and built new kinds of communities.

Chapters Three and Four provide most of the material for this lecture, but some material also comes from Chapters Six, Seventeen, and Eighteen.

This lecture pictures the many ways that gender bending and testing gender boundaries helped resist Roman violence and develop new kinds of communities.  It surveys the different dimensions of creativity and patriarchy within Anointed communities, Jesus movements, and wisdom communities during these two hundred years of upheaval and ingenuity.  This lecture then undoes the later masculine power in so much of Church and Christianity, and re-opens new kinds of women’s leadership and vulnerable men.

Chapters Seven and Eight are at the heart of this lecture, but Chapters Ten, Eleven, Twelve, and Eighteen also add to the complexity of new identities through gender.

Lecture Four: No Christians in the First Two Centuries

Chapter Two is the primary place that this lecture comes from; but almost every other chapter ends up helping get beyond the words “Christian” and “Christianity” into the wild and diverse experiences of the many different communities and movements.

Lecture Five: The Centrality of Israel for the Jesus Movements of the First Two Centuries

Chapter Nine guides the lecture into this depth of the meaning of the people of Israel for all these different groups and movements; but there is hardly any chapter that does not show the people of Israel provide the major traditions and creativity for these first two hundred years.

Introducing clearly that there was no such thing as a New Testament in the first two hundred years, this lecture reclaims how these many groups were deeply imbedded in oral culture.  The lecture shows how the Anointed clubs, the Wisdom circles, and the Jesus groups’ writings were not book-oriented, but mostly complicated combinations of memorials, songs, bathings, and meals with lively discussions.

Chapter Nineteen carves the way from the myth of “Bibles” in these first two centuries into portraits of lively communities and oral practice.

Title: Extraordinary Gems of Wisdom: A Conversation with Shirley Paulson, PhD
Presenter: Shirley Paulson, PhD
Date: Wednesday, September 29, 2021
Description: Paulson discussed the value of reading apocryphal texts and how her forthcoming book demonstrates the importance of knowing them today. The book, Illuminating the Secret Revelation of John: Catching the Light highlights the rich conversations among second-century Christians about the meaning of life, how evil happens, and how the Christian savior works.

Title: The Secret Revelation of John, a 2nd Century Healing Text: Was it Christian, Gnostic, or Something Else?
Presenter: Shirley Paulson, PhD
Date: July 22, 2021
Description:  Buried for more than a thousand years in the sands of Egypt, the Secret Revelation of John has stayed a secret far longer than it should have. Even now, 75 years after its discovery in 1945, it eludes easy understanding even as it shines with the message of God’s loving presence amid suffering and pain. Shirley discussed the Secret Revelation of John’s three gems of healing wisdom that have been encrusted in a millennium of doubt and theological limitation.

Title: The Gospel of Thomas and the Bible: Why It Matters to Christian Scientists
Presenter: Shirley Paulson, PhD
Type: Presentation (via Zoom)
Date: June 17, 2021
Where: Principia Summer Session (Online)

Title: “If Not Christian, Then What”
Presenters: Hal Taussig with Brandon Scott and Erin Vearncombe
Type: Seminar discussion of paper presentation
Date: May 9, 2020
Where: Westar Institute Spring Meeting of Christianity Seminar (Online)

I was very interested in Dr Paulson’s talk on healing among early Jesus followers. I now know what it means to be an “early Jesus follower” and why that term is used. The context of life at the time, the overview of the Secret Revelation of John, the ideas shared on the beliefs and practices during Jesus’ day were fascinating. After this talk, I look forward to learning more!  — Bonnie Jean Schlaepfer, Denver, CO

One thing you can always count on when Shirley Paulson speaks:  her passion and conviction about her subject.  She takes complex material and breaks it down for a newcomer to the material to understand.  Her tremendous academic training has prepared her to share these early texts in new, fresh ways that bring the latest scholarship to bear.  Enjoy! — Madelon Maupin, Newport Beach, CA (Founder, Bible Roads)

Recently I was privileged to take a fascinating 2-week course from Dr. Shirley Paulson, based on her years of research on early Christian texts. To be able to study extracanonical texts, discovered in 1945, added greatly to my understanding of theological issues both then and now. — Lucy Harper, Atlanta, GA

Your message was incisive, powerful, and focused … Your broader theme assures us that, regardless of whatever outward turmoil seems to be present, by keeping our focus on the three gems, we can experience the harmony of God’s creation right here and now. — Dennis Page, Trabuco Canyon, CA, Attorney at Law

Such amazing, eye-opening, helpful information. The fruits of your study research digging are so helpful…

Getting exposed/acquainted to the ancient extracanonical texts for the first time – now I need to go home and study them.

Interested in non-canonical healings; how early Christian churches organized; explanations about the Council of Nicea and its impact on history; closer historical context; great perspective: explanations through good metaphors.

There was so much here that I could take this again and continue to learn more — have more texts been found? Grateful for all. I think you were very thorough. I appreciate your bibliography and back-up for many of the ideas given.

I enjoyed all of it and got a lot out of it.