Home » The Book: Illuminating the Secret Revelation of John: Catching the Light

Illuminating the Secret Revelation of John: Catching the Light

The book by Shirley Paulson, PhD

Published in 2022, the exciting new book by Shirley Paulson is available from Amazon, Barnes and Noble, Cascade, or by ordering a signed copy directly from the author.

Illuminating the Secret Revelation of John: Catching the Light is for people seeking to understand Jesus’s teachings in a new way.

1) a thorough exploration of the Secret Revelation of John, including where the ancient book came from, what it meant in the second century, and why it’s valuable today.

2) a paraphrase of the whole Secret Revelation of John that does not depend on the reader having extensive knowledge of second-century culture.

The Secret Revelation of John, unearthed in 1945, has bewildered and excited scholars and religious thinkers ever since its discovery.

It was found in central Egypt, near Nag Hammadi, and it consists of a collection of writings that shifts our view of early Christianity in startling ways. Only one of the treatises in that collection appears three times, indicating its importance in the overall collection. This is the Secret Revelation of John (scholars also call it the Apocryphon of John). Unlike the biblical book, the Revelation to John, this (relatively) new discovery includes the whole Christian story of creation, how evil operates in the world, and how the Savior saves. 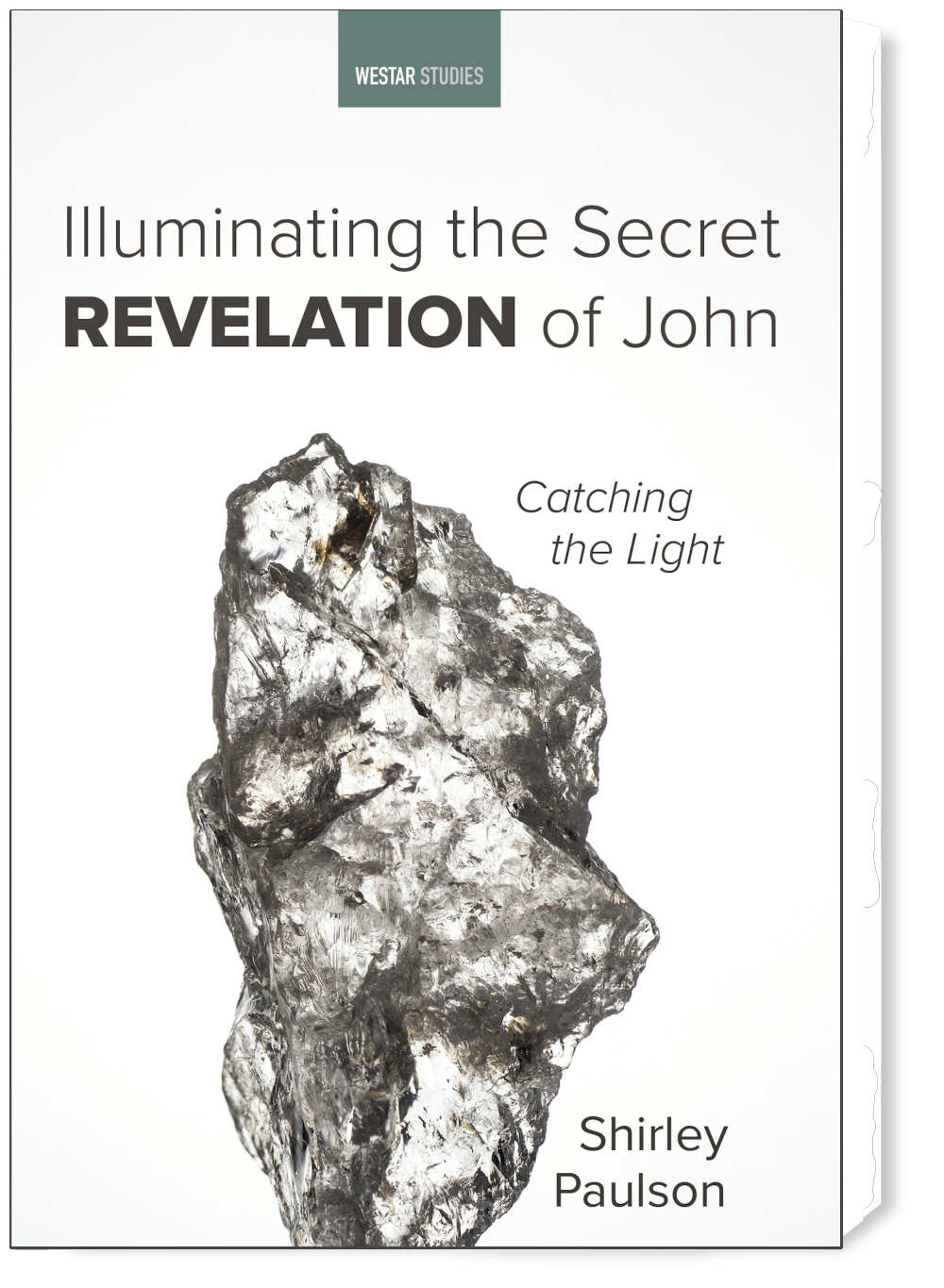 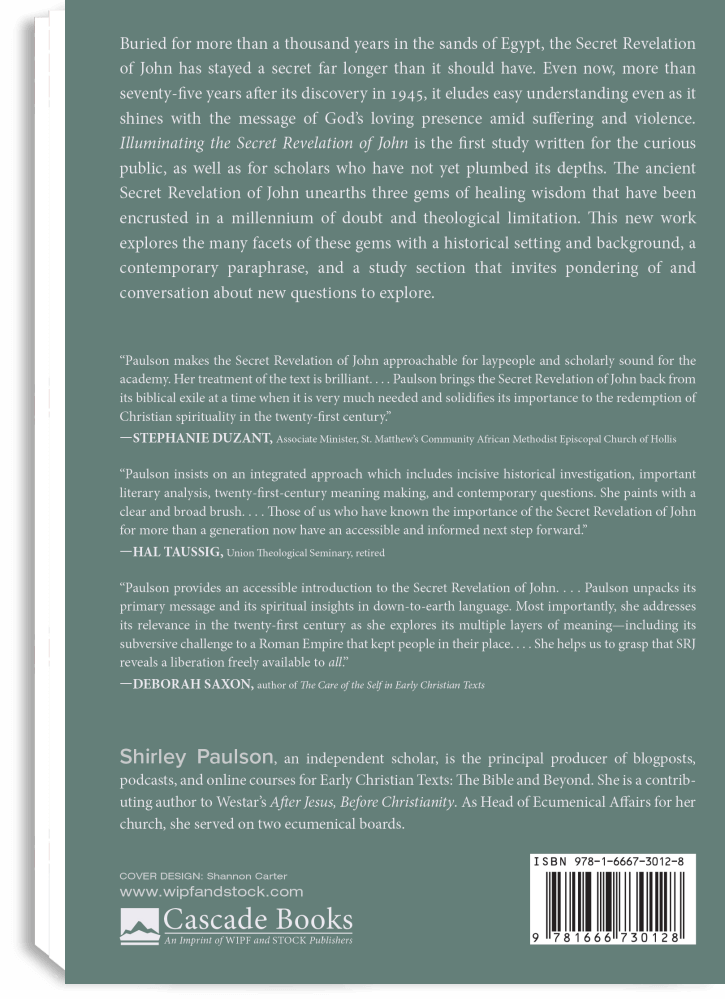 The Secret Revelation of John was probably written around the same time some of the later books of the Bible took shape, but it was lost and buried around the 4th century. Although it was hidden throughout most of Christian history, its message seems especially relevant today because it appeared at a time somewhat like our own.

The book was written a little over a hundred years after Jesus was gone, and the Roman aggression against ‘others’ had risen to its peak. Some parts of the Roman world thrived, but their glory was built on the backs of non-Romans who were crushed. Scholars do not know who the author of this remarkable text is, but it seems evident he must have been a Jewish follower of Jesus who saw hope and help in the message of Jesus for his own day.

So what is the Secret Revelation of John about?

It’s an imaginary story of Jesus’s disciple John grieving over the loss of Jesus and his guidance when the world was falling apart all around him. Jesus appears to him in a vision and brings him hope and guidance by explaining how to claim his divine right to freedom. It might have been understood as a ‘secret’ because the powerhouse in Rome couldn’t see the inner strength Jesus was defending in his followers.

The first portion of the Secret Revelation builds a deep foundation for the battle that lies ahead. It argues for the unfailing and ineffable goodness of the divine Being who is called by several names, such as Invisible Spirit. The battles and struggles of the world are so horrific, the author of the ancient text affirms God’s capacity to overrule every one of the weak spots that could allow creation to falter. There is no lack of love, no lack of wisdom, and no lack of power to defend the integrity of the divine realm.

This foundation is crucial, for the second part of the Secret Revelation unleashes the cruelty of everything that would—if it could—oppose God’s order of harmony, from subtle deceit to outright violence. The mythic character who embodies this opposition, named Yaldabaoth, exposes his own counterfeit nature by claiming to be the one and only great god. His deceitful, lying character provides the key to freedom, because the work of the Savior sent by God was to expose the fraudulence of his lies. The Savior demonstrates why anyone can be saved from unjust oppression. They need not just react in fear or anger, but they can act on God’s empowerment and resist the false authorities.

Order a signed copy of the book directly from the author.

Signed copies of the book (paperback) are available directly from the author for $26.99 including shipping.
Books are sent USPS Media Mail and generally arrive within 7 business days of placing your order.
If you need to order a hardback copy, several copies at once, or need expedited or international shipping please let us know via the contact form here.

The first part of the series features conversations between Shirley and Dr. Aurthur Dewey, editor of the book and professor of theology at Xavier University.

The second part of the series features excerpts from a conversation with Natalie Renee Perkins, pastor and creative professional.

Series One, Episode One

Hear how the concept of “finding reality” is a great tool for working your way out of tough experiences.

Jesus and Sophia model each other, living in timeless aeons.

Why Use Mythic Language?

Why using mythic language can be useful to us today.

Death becomes less important when we realize the enduring and transforming role of the soul.

The author of the “Secret Revelation of John” models a confidence in the spiritual realm of life.

Salvation is a True Help

“Salvation,” the word, really meant to help and heal people.

The True Advantages of Gnosis

Gnosis can help people, but it doesn’t encourage striving for superiority.

Real life ministry helps us navigate that space between the spiritual and natural life.

How Myth Can Bring Hope in the World Today

Myths help us feel that our work matters.

A New Take on Genesis

We can keep on distancing ourselves from the pursuit of hurtful systems.

It’s not until there’s some disobedience that you get the needed attention!

Universalist Salvation: A Matter of Choice

Choices we make all the time contribute to our salvation.

Leaning Towards the Good

‘Soul’ has no beginning or end, and keeps calling us to work toward the good.

View the table of contents and read chapter one from Illuminating the Secret Revelation of John: Catching the Light.
The excerpt is in pdf format, and will open in a new tab or window.
Excerpt provided for private use only. All rights reserved. Duplication, distribution, and/or sharing prohibited.

For information included in the book’s press kit, click any of the links below.
Documents are provided in pdf format and will open in a new tab or window.
Images are provided as zip files of high resolution jpgs. 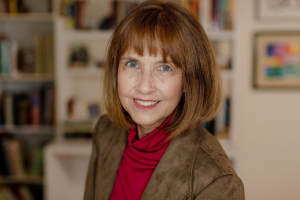 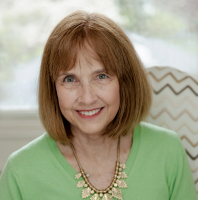 Find out what people are saying and writing about Illuminating the Secret Revelation of John: Catching the Light.

Hear how Rev. Natalie Renee Perkins responds to re-encountering the Secret Revelation of John through Shirley’s book. Rev. Perkins serves as Minister for Worship and Online Community at Middle Collegiate Church. She received her Masters of Divinity from Union Theological Seminary in 2015 and was awarded the Karen Ziegler Feminist Preaching Prize.

© 2022 by Natalie R. Perkins. All rights reserved. Used by permission.

“I just finished reading from chapter 22 of your paraphrase, to the end. I have feelings so big I don’t have any words for them right now. All I can tell you is I am grateful, beyond any way that I can express it, for the work you did in illuminating the secret revelation so that I could be blessed by it.”

Paulson insists on an integrated approach which includes incisive historical investigation, important literary analysis, 21st century meaning making, and contemporary questions.  She paints with a clear and broad brush. . . . Those of us who have known the important of the Secret Revelation of John for more than a generation now have an accessible and informed next step forward.

Paulson provides an accessible introduction to the Secret Revelation of John. . . Paulson unpacks its primary message and its spiritual insights in down-to-earth language. Most importantly, she addresses its relevance in the twenty-first century as she explores its multiple layers of meaning—including its subversive challenge to a Roman Empire that kept people in their place. . . She helps us to grasp that SRJ reveals a liberation freely available to all.

Deborah Saxon, Author of The Care of the Self in Early Christian Texts