The Thought of Norea from the Nag Hammadi Library

I would like to tell you why I love Norea! In case you don’t know her, or you missed Hal Taussig’s blog post about Norea from January 2022, I want to introduce you to one of the small books in the Nag Hammadi collection known as The Thought of Norea.

The ‘book,’ or treatise, is quite short—only 52 lines long—but it is packed with profound ideas about how the divine connects with the human. Isn’t this the basic question all religious thinkers have wrestled with throughout the ages?

Who is Norea, and where did she come from? Why do we need to know about her?

People who need help in life or want to help others know they need ‘a savior’—or a reliable source of help. Norea is one of those helpers with the divine connection.

People who want to know more about what was going on around Jesus and other biblical events would want to know about these discoveries from Nag Hammadi. Norea is nowhere to be seen in the canonical writings in the New Testament, but as Hal Taussig explains in his blog post, Norea connects to God in similar ways that Christ connects to God. This relationship seems like a female echo of the male-oriented views of Christ more familiar to modern readers of the New Testament.

We have become aware that most of the female images related to divinity known during the first couple of centuries were excluded from the texts that were later selected as the canon forming the New Testament. Finding Norea in a few of the Nag Hammadi books expands our view of the early Jesus followers and their concept of the human and divine connection.

How does the divine relate to the human, and how does that work? Is it a function of a divine miracle? Or something else? Is there a divine creator who made us and then left us? Or didn’t leave us? Is there a divine Mind that knows everything and judges us? Or doesn’t judge us? Does God just boss us around? Are we forever just missing the mark? Is the Father figure for both Jesus and Norea truly a divine being?

Getting to know Norea helps us get a better picture of these issues. Near the beginning of this short text, Norea “cries out to” the divine being for help. This being has several names, such as “Voice of Truth,” Upright Mind,” “Untouchable Word,” and “Father of all.” Somewhat frustratingly, the text does not tell us why Norea is crying out or what her problem is. But it happens that another text among the Nag Hammadi codices explains at least one of Norea’s problems: evil rulers are attempting to rape her! But now in the 21st century, we don’t have enough information to know if this is what she cries out about in The Thought of Norea.

What we do know is that “they [the divine entity] heard, and they received her into her place forever!” Her prayer appears to have opened the way for her to remain safely in the divine presence. Almost every phrase in this text answers questions but raises more.  The fact that “they heard” does sound like Norea was rescued from her problem, or ‘saved.’

But what does she do, as she “rests in the ineffable Epinoia (Insight)” of the Light? She joins “all of the Imperishable Ones, and speaks with the mind of the Father.”

This kind of language sounds like she has gained a divine source for speaking. By joining the “imperishable ones,” she also possesses the “words of Life” which “she had received before the world came into being.” We could think of her as having transcended the limitations of mortality, with eternal life having no beginning or end of her being. And by possessing these words of life, she is able to help—or save—others.

But when she gains this spiritual strength through her prayer, she didn’t just disappear into the sky, either! Despite her having access to this divine source of light and life, she is still involved in the worldly state.

“There will be days when she will behold the Fullness, and she will not be in Deficiency, for she has the four holy helpers who intercede on her behalf with the Father of the All, Adamas.”

A paraphrase for this could be:

There will be times when Norea grasps the complete spiritual view clearly and will not suffer from her limited human nature. She has four saviors who help her make the connection with the divine being.

I’d love to know who the “four holy helpers” refer to. The text doesn’t say any more about them, but Norea seems to illustrate for the rest of us that even helpers need helpers from the divine source. She’s modeling for us how to find the divine help for ourselves and how, in turn, we become helpers for others.

Norea provides one more window on the world of the early Christ followers. She can open our eyes to a more practical and meaningful way to become ‘helped helpers’ in the 21st century. 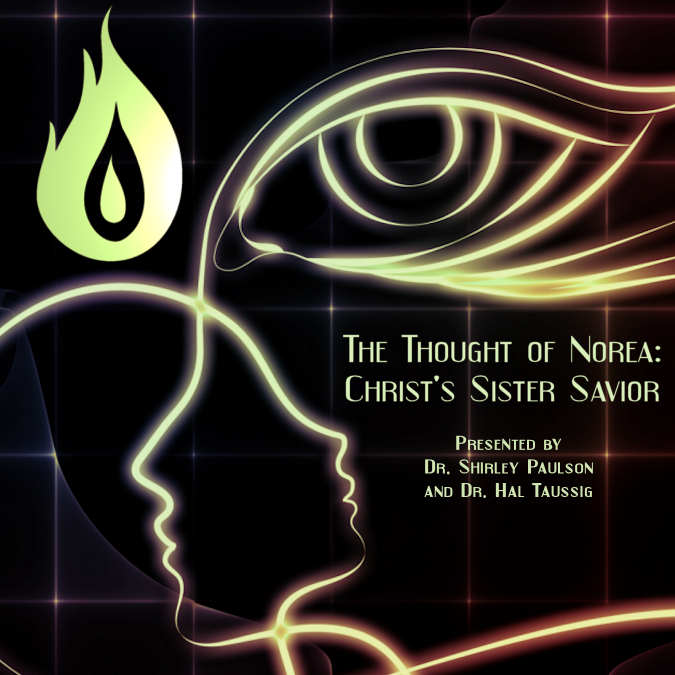 Hal Taussig and I are so pleased to announce that we have published a new online course, titled “The Thought of Norea: Christ’s Sister Savior.” This is the third in the Nag Hammadi series.

The course is available now on the Udemy platform.

Learn more about the course here.