The Bible Can Be Art (As Well as Text) 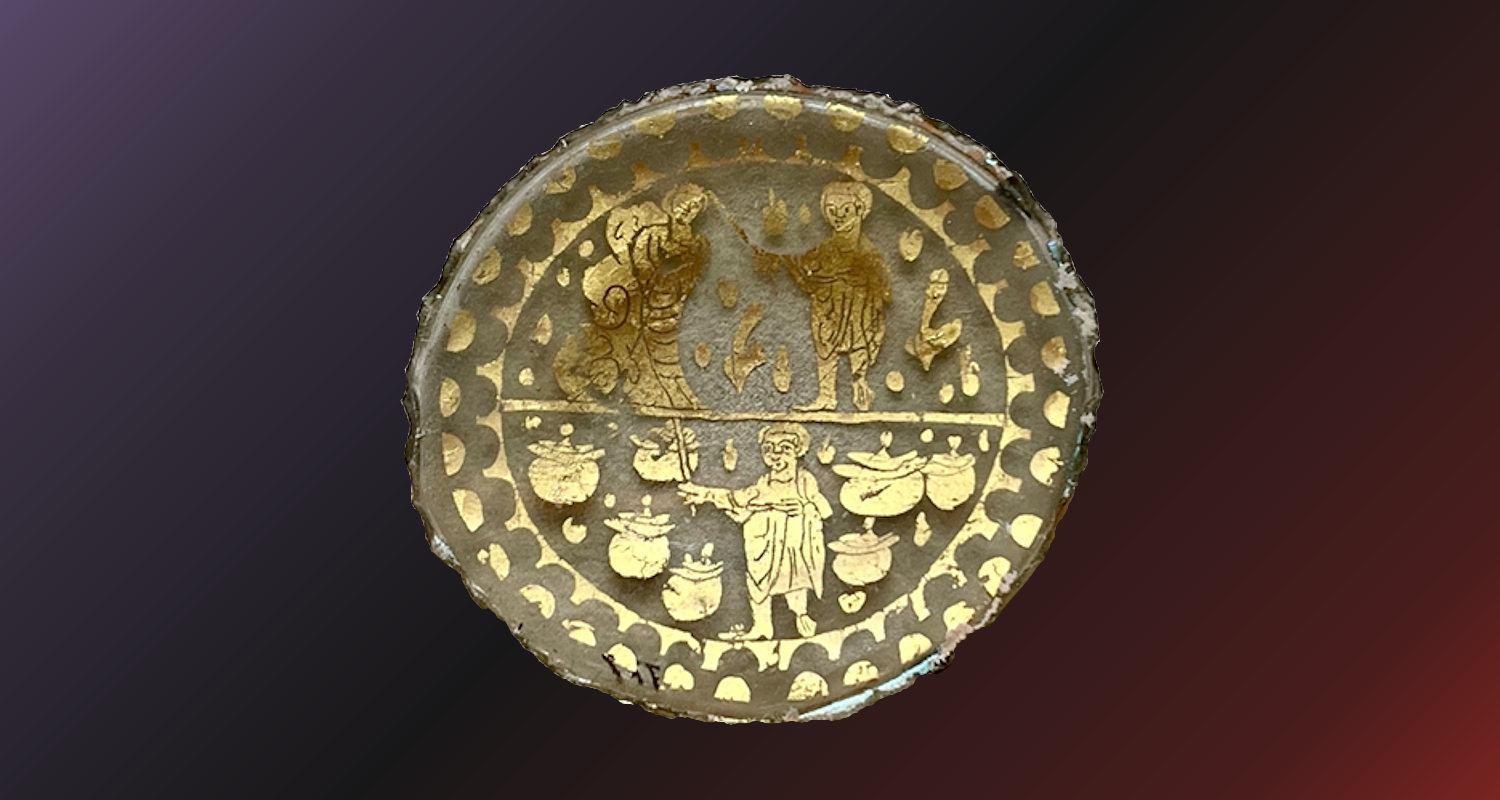 We tend to think about a bible, which we might point to on a table, or the Bible, by which we might mean the collection of texts that circulate together in a canonical form. Both of these ways of talking about bible—the very specific, object-oriented language and the more abstract, universalizing language—assume a kind of stability and durability for bible. But these ways of thinking about bible are comparatively recent, having arisen in the wake of the printing press, and they miss a whole swath of other things that we might call biblical without being bible, exactly. Is a t-shirt with John 3:16 on it bible? It’s not a bible, it’s not the bible, but it’s bible, in some sense. Is graffiti quoting Romans also bible? Maybe. What about a bracelet that cites the Prayer of Jabez?

I’ve been thinking about these questions alongside a fascinating object, a “gold glass” held by the Vatican Museums in Rome. Gold glasses are not common, exactly, but dozens of them survive to the present, including many that display Jewish or Christian themes. I’m interested in one gold glass in particular, the one pictured here, which is a little bit unusual, because it’s divided into two halves, upper and lower. Other gold glasses do this, but what’s a little bit unique about this one is that each of its semicircular halves portrays a story from the gospel of John. On the upper register is a depiction of the raising of Lazarus, with Jesus standing facing the tomb, calling Lazarus out. On the lower register, Jesus appears again, looking very much the same, but this time he is standing with seven jars. This is a depiction of the miracle at Cana. In both, Jesus is holding a staff or wand.

I find it fascinating that these two stories, of all the possibilities, are juxtaposed on this gold glass. What kind of interpretive choices led to this combination? Who commissioned or made this gold glass, and for what purpose? Gold glasses were probably the bases of larger vessels that had their sides broken off, as Rivka Ben-Sasson, Leonard Rutgers, and others have argued. Did these two stories serve some purpose in a drinking or serving vessel that has carried over to this medallion form?

Those are interesting questions, but at the moment I’m more interested in another set of questions. I’m curious about the materiality of this gold glass and others like it. How can we think of this as bible, even though it’s not a bible or the Bible? What does it mean to have a dual citation like this in a glass form, rather than in a vellum or papyrus text or in a fresco? Did the people who made and used this glass think of it as bible, as biblical, or did they even have a notion of bible at all, in the age when the canon as we know it was just beginning to emerge? How does material interact with our notions of bible, and how does material get a say in what the bible says and how it says it?

I’m still wrestling with these questions, working on an article that puts this gold glass in conversation with some work by New Materialist thinkers. I’m not even sure yet where I will come out on it, but I am happy to introduce you to this fascinating and beautiful piece of history.

Eric C. Smith teaches in the fields of biblical studies and early Christianity, co-directs Iliff’s Doctor of Ministry in Prophetic Leadership program, and serves as liaison to the Disciples Seminary Foundation. His research and teaching center on a constellation of interests in the world of late antiquity, including identity formation, material culture and materialist approaches to religion, and both ancient and modern interpretations of biblical texts. Smith is the author of many books, articles and chapters. His books are Jewish Glass and Christian Stone: A Materialist Mapping of the Parting of the Ways (Routledge 2018); Paul the Progressive? The Compassionate Christian’s Guide to Reclaiming the Apostle as an Ally (Chalice 2019)—written for popular audiences; and Sovereignties, Spaces, Subjects, and Spirits: The Necropolitics of the Acts of the Apostles (SBL Press, forthcoming).