Skip to content
The Gospel of Mark: The Good News of Transgressing Boundaries

Home » The Bible and Beyond » Blog » The Gospel of Mark: The Good News of Transgressing Boundaries

The Gospel of Mark: The Good News of Transgressing Boundaries 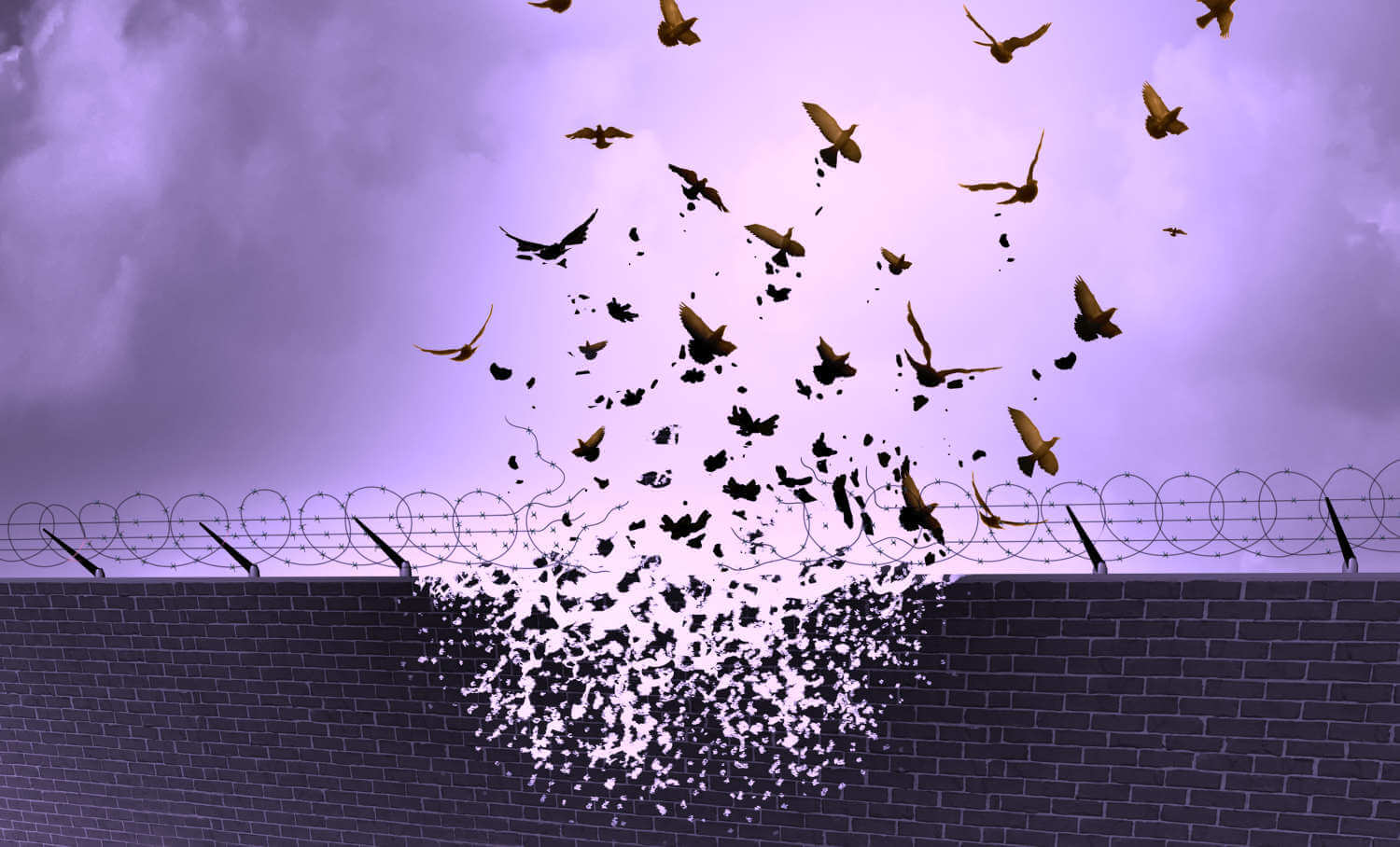 In last month’s post, “The Difficulties and Art of Translation,” we worked through the translation of the healing of a leper, one of the first healing stories in Mark’s Gospel. In that translation Jesus is angry, snorts like a horse at the man, and throws him out. Later scribes and translators found this story shocking and so smoothed off its rough edges.

The author of the Gospel attributed to Mark composed the first written narrative of Jesus, what the Greeks called a ’Life’ or bios. The writing is anonymous, although sometime in the third century the name ‘Mark,’ a reputed disciple of Peter, was attached to the writing. I will call this person ‘the author,’ honoring the author’s anonymity and will not use a personal pronoun because the author’s sex is not evident.

Written sometime after the destruction of Jerusalem in 70 CE and before the assassination of the emperor Domitian in 96 CE, it may have been composed in the Galilee* or southern Syria since the Galilee plays a prominent role in the story.

What did the author have to work with? The Jesus tradition circulated in oral form among proclaimers, missionaries, and storytellers. Meals provided the most common occasion for retelling these stories. The tradition was in bits and pieces, with no connected narratives. Recall the stories you know about your grandparents or great grandparents. They too are in bits and pieces, not a whole biography. Our author faced the same situation and so needed to construct a life, but how? The author employed a simple three-part pattern:

Homer’s Odyssey made travel narratives one of the most important narrative genres in Greek. Life is a journey. This simple form created by our author was so convincing that it has henceforth been the basis of all attempts to tell Jesus’s story. The connections in this story and the outline are the author’s creation. What the author knows are the bits and pieces the author has heard; the rest is made up.

Most lives start with the hero’s birth, but our author decided that the most important thing about this story was the hero’s “good news” (English “Gospel”). So, the story . The author does not immediately disclose what the good news is, except that it pertains to the empire of God. The task of the reader is to discover what the good news means by reading and understanding the story. Jesus is constantly upbraiding folks to understand. “Those who have ears, let them understand!” or as we say, “Can’t you see!”

Most lives end with the hero’s death, but this hero has an afterlife, so where does the good news end and how to tell that presented a bit of a problem.

The first part of this three-part story involves Jesus travelling around the Galilee announcing the good news of the coming of God’s empire. He announces, teaches, heals, and casts out demons. The line between healing stories and exorcisms is often blurred. In the healing of the leper, at its conclusion, Jesus throws him out, literally casts him out. This same word in Greek used for casting out demons, makes a connection a hearer of the story in Greek would readily note.

The Galilee section contains many oddities meant to disturb the reader. Some are transgressive.

Jesus defines his purpose for teaching in parables with the paradoxical quote:

They may look with eyes wide open
but never quite see,
and may listen with ears attuned
but never quite understand,
otherwise they might turn around and find forgiveness

(Mark 4:12; a quote based on Isaiah 6:9. All translations are from The Complete Gospels, unless otherwise noted).

The quote leaves interpreters of the parables chasing their tales, facing riddle upon riddle. If parables are not meant to explain but to hide, how do we interpret them? In this story, the disciples never figure out Jesus’ teaching.

In the story of the man who lived among the tombs in the region of the Gerasenes, the name of the demons is “Legion,” a clear reference to the Roman occupying army (see Hal Taussig’s blog post, “Legions of Laughter”). By casting out the demons (soldiers) into a herd of pigs—in Jewish eyes the most unclean of meats—he calls the Roman legion pigs. But the tale’s ending has an even more transgressive point: “he (the exorcised man) went away and started spreading the news in the Ten Cities about what Jesus had done for him, and everybody would marvel” (5:20). The Ten Cities are non-Jewish cities, cities of the nations. A man from whom a legion of demons had been cast out starts the Gentile mission. What a beginning! Certainly not very flattering to the Gentiles.

A Greek woman, “by race a Phoenician from Syria” requests that he cast out a demon from her daughter. But Jesus refuses, “Let the children be fed first, since it isn’t good to take bread out of children’s mouths and throw it to the dogs!” (7:27). The dogs, a slur, are the non-Jews. The woman’s non-Jewishness is emphasized by calling her Greek and by race a Phoenician from Syria.

But this Greek, foreign female challenges Jesus, a male: “Sir, even the dogs under the table get to eat scraps ‘dropped by’ children!” (7:28). Jesus commends her retort and casts the demon out of her daughter.

In the story immediately before that of a Greek woman from Syria, Jesus teaches, “Listen to me, all of you, and try to understand. What goes into you can’t defile you; what comes out of you can. If anyone here has two good ears, use ‘em!” (7:14-16)

This saying reverses the Jewish purity code. Impurity does not come from the outside but the inside—a complete reversal of the traditional teaching. When his disciples once again do not understand and question him about how this can be, he responds: “Don’t you realize that nothing from outside can defile by going into a person, it doesn’t get to the heart but passes into the stomach, and comes out in the outhouse?” (7:18-19)

Then our author comments: “he declared all food clean,” wiping away the purity code. With this, our author provides an important clue for the interpretation of who Jesus is. Jesus is a transgressor; he transgresses boundaries, all kinds of boundaries.

At the conclusion of the story of the Greek Phoenician woman from Syria, “he left the regions of Tyre and traveled through Sidon to the Sea of Galilee, through the middle of the region known as the Ten Cities” (7:31). To us this sounds like a travelog, but to an attentive Jew schooled in the purity codes, Jesus is transgressing forbidden geographical boundaries, making him impure.

Unlike the Roman empire, the good news is that God’s empire has no boundaries!

The author has given us new eyes with which to read the story. Go back to the very beginning of Jesus’ story, right after his baptism. Jesus comes to Capernaum and teaches on the Sabbath. He, a lay person, not one of the synagogue authorities, teaches. “They were astonished at his teaching, since he would teach them on his own authority, unlike the scholars” (1:22).

He has stepped out of the sacred tradition. Then on the Sabbath he casts out a demon, that is, he works on the Sabbath. “Jesus yelled at it, ‘Shut up and get out of him!’” (1:25) The crowd responds “What’s this? A new kind of teaching backed by authority!” (1:27) The new teaching is casting out (working) on the Sabbath.

Finally, upon entering Peter’s home, he goes up to Peter’s mother-in-law, “took hold of her hand, raised her up, and the fever disappeared” (1:31). He, a male, enters the space of a female and touches her. Another boundary transgressed.

Jesus is transgressive. People who transgress purity standards are dirty, they break boundaries. They do not conform to normal, standard, traditional expectations. They snort, they get angry, and cast people out.

Our author has provided us with new eyes with which to view the story, the good news. Use those eyes, and the story will open up in amazing ways. Try reading this gospel and look for the transgressions, the breaking of boundaries. There are yet more radical boundaries to break in ferreting out the good news.

In our next post we will turn to the story’s ending for its ultimate transgression.

* “Galilee” is a description of a region, not a name of place, like, ‘The Rocky Mountains,’ or “The Upper Midwest.’ So, referring to this region as “the Galilee” is grammatically correct.