Skip to content
No Private Thoughts? Desire in The Shepherd of Hermas

Home » The Bible and Beyond » Blog » No Private Thoughts? Desire in The Shepherd of Hermas

No Private Thoughts? Desire in The Shepherd of Hermas 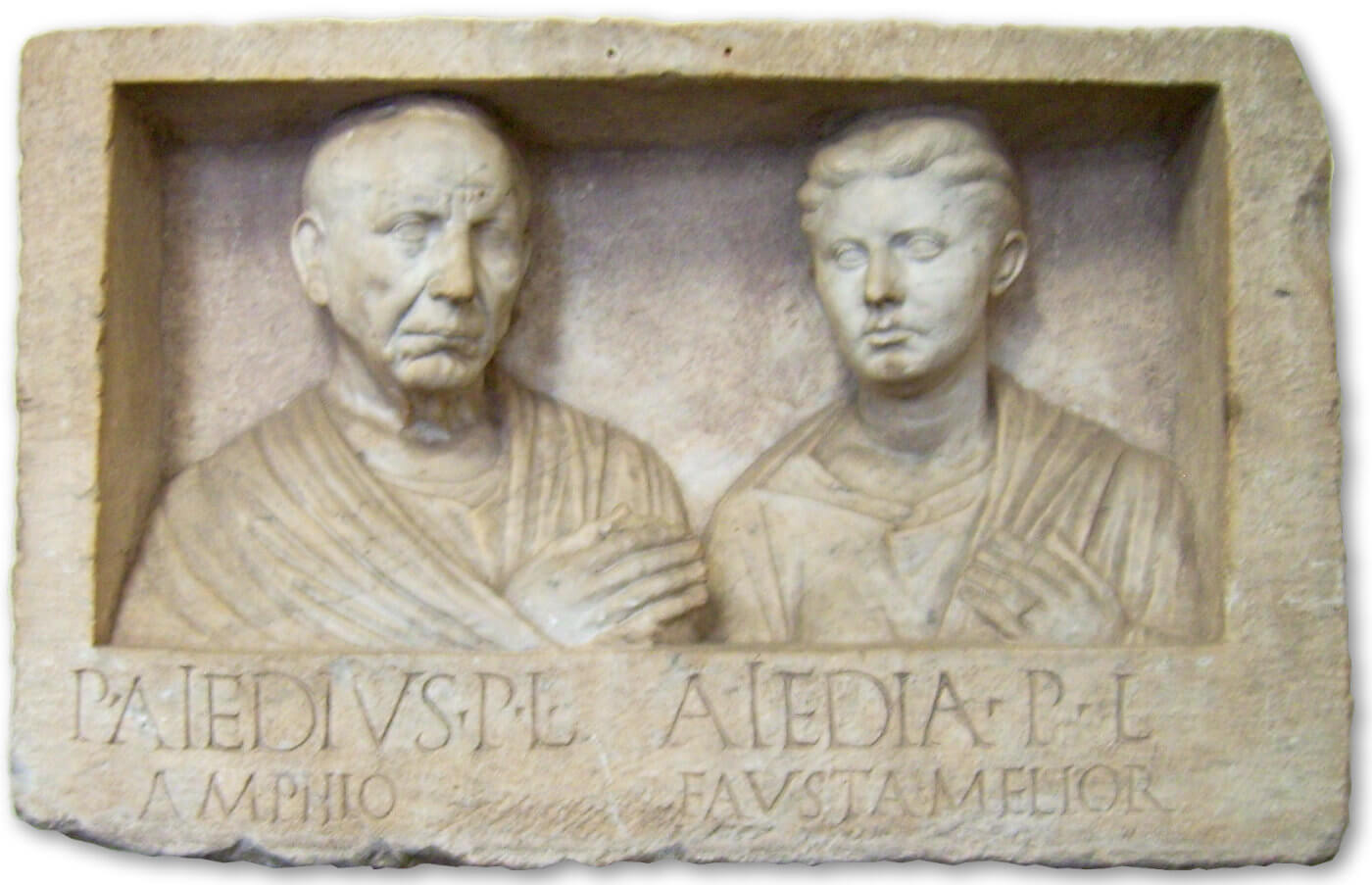 A successful freedman, like Hermas, with his young wife.
(“Grave relief of Publius Aiedius and Aiedia,” picture taken by Marcus Cyron – Own work, CC BY-SA 3.0 – from Wikimedia Commons)

Sex grabs attention. The opening scene of The Shepherd of Hermas is no exception. Is this why this early Christian text was so popular? Maybe not, but the opening scenes give us a glimpse into the mind of a male leader in the early movement as he grapples with his sexual desire.

Imagine him telling this story out loud, revealing his internal world, in the presence of other community members:

The one who raised me sold me to a certain woman named Rhoda, in Rome. After many years, I regained her acquaintance and began to love her as a sister. When some time had passed, I saw her bathing in the Tiber river; and I gave her my hand to help her out of the river. When I observed her beauty I began reasoning in my heart, ‘I would be fortunate to have a wife of such beauty and character.’ This is all I had in mind, nothing else. (1.1-2) [1]

Would you believe him? Or would you think, “Methinks he doth protest too much!”? His telling continues with a vision that confronts his version that pretends, “Really, I was just appreciating Rhoda as a sister.” A short time later, Rhoda appears to him in a vision that interrupts his penitential prayer and challenges his self-deceit. She raises the issue of the sin of his penetrating gaze, indicating God’s anger and displeasure over Hermas’s sin against her.

Hermas protests, of course, that his behavior and his thoughts about Rhoda have been blameless:

Hermas had assumed that he could have private thoughts, thoughts he believed to be harmless. Rhoda enlightens him of his error on both counts.

First, his thoughts are not private. God sees into his mind.

His mind has become a stage for the performance of his virtue. God is the audience for the performance on the stage of his mind just as his neighbors and community form the audience for his outward conduct on the stage of his household. On both stages, he performs his virtue. The intentions of his heart are as important as his actions for this performance. His internal intentions establish his reputation in heaven. The heavenly reputation is the one that counts, of course.

We might think of this using contemporary psychological notions of a search for personal integrity in striving for the congruence of our internal intentions and outward actions. [2] Hermas’s narrative offers insights for understanding our own thought processes today. Do we sense an audience for our thoughts and intentions? Is it God? Is it people whose opinions we have internalized? Is some form of internalized audience necessary for genuine self-reflection?

Rhoda has thus shown Hermas, first, that his thoughts are not private. She shows him, secondly that his desirous thoughts are not harmless. Rhoda asserts that his fantasies about her are a sin against her. As a woman and as his former owner, Rhoda commands respect for her bodily integrity. She maintains her right to be protected not only from unwanted physical contact but also from the penetration of Hermas’s gaze and from his imagined relationship with her. From the outset, Hermas contends with his sexual desire, even though he unsuccessfully deceives himself of his innocence of it. He wrestles with his desire for Rhoda not as a private internal matter he seeks to correct (or perhaps enjoy?) within his own private thoughts, but as a relational transgression. Rhoda, even as the Rhoda of his own mind, is offended. Hermas takes the offense seriously in his narrative. Even though his concern is focused on his own salvation, we see him expressing remorse amid some confusion about his actions.

We might reflect on what Hermas’s response says to recent “Me, too” scandals.

Often men who are confronted about their offensive speech respond with a version of “I’m sorry you were offended,” as if the offense is all in the woman’s head. When privileged men physically assault women, they are often given a free pass because their career and future is valued more than any harm done to a woman. Hermas’s response is quite different. His narrative recognizes a real offense against Rhoda even if they are just thoughts, not actions. While Hermas adopts a celibate life in what follows, including in his actual rather than fantasized marriage, the attention his narrative gives to how his sexual thoughts affect the object of his desires can give us pause for thought in our own day.

[2] The notion of congruence and incongruence were advocated by twentieth century humanistic psychologists, notably Carl Rogers. [back to text]

Online Discussion about The Shepherd of Hermas

Dr. Elliott is leading a weekly course on The Shepherd of Hermas (via Zoom) during October of 2019. Please join the fun at 8:00 – 9:30 pm Eastern time on Monday nights.  Everyone is welcome!

About the Author: Elli Elliott

Author of Family Empires, Roman and Christian: Volume I Roman Family Empires, Elli (formally Dr. Susan M. Elliott) is a researcher who walks the talk as a social justice advocate. She is currently convening Stone Circles: A Generative Forum for Thinking in Places, a project in the high plains of Montana and Wyoming that includes indigenous and settler thinkers. She is also an analyst with the Westar Institute’s think tank and serves on the Westar Board of Directors. Visit her website, LinkedIn profile, and Facebook page.