Skip to content
Why the Gospel of Luke Framed Mary Magdalene

Why the Gospel of Luke Framed Mary Magdalene 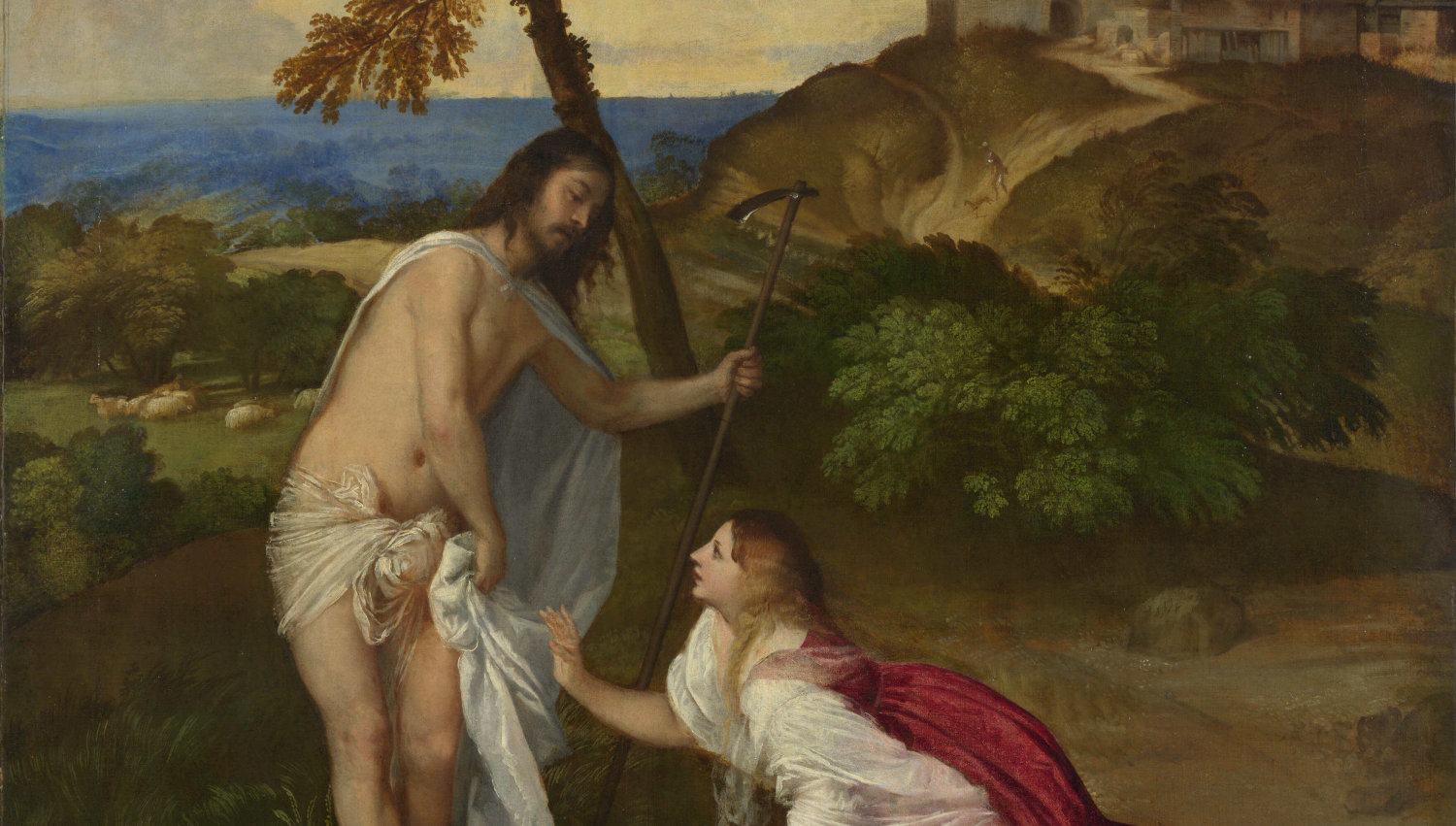 Detail from “Noli Me Tangere” painted by Titian and in the collection of the National Gallery, public domain.

In my video blog post “How Did Mary Magdalene Lose her Reputation,” we saw that the Gospel of Luke started the process of denigrating Mary Magdalene’s reputation that ended with Pope Gregory (591 CE) assembling the pieces into an image of her as a prostitute. The fallen woman has fascinated and titillated Christians ever since, yet that image is completely ahistorical, a fantasy of the male imagination. Why did the author of Luke’s Gospel want to frame Mary Magdalene?

In Luke’s Gospel, in contrast with Mark, the women remain anonymous at the crucifixion, burial, and tomb. But when the women tell the Eleven what occurred at the tomb, only then are they named: “The group included Mary of Magdala and Joanna and Mary the mother of James, and the rest of the women companions” (Luke 24:10). Moreover, the apostles dismiss the women’s report as “nonsense” (24:11), something not to be believed.

Why do the apostles dismiss the witness of the women? We must inquire behind what a text says to discover why it says that. To answer the why question we must fit various pieces together into an interpretation. That inevitably requires speculation, because the author did not answer this question directly but only by implication. That is always a reader’s task, to fit together the pieces the author has left behind.

Peter and the Twelve Apostles

An important concern of the Gospel of Luke and the Acts of the Apostles, both by the same author, is to establish the authority of the twelve apostles. In the calling of the twelve, Luke explicitly says: “The next day, he called his disciples and selected twelve of them, whom he named apostles” (Luke 6:13). This verse creates the twelve apostles as a group. The Marcan parallel, which Luke edits to create his version, reads very differently: “He formed a group of twelve to be his companions, and to be sent out to preach, and to have authority to drive out demons” (Mark 3:14-15). In Mark there is no group called the twelve apostles. In the much older 1 Corinthians 15:5-7 the twelve and the apostles are two separate groups. Luke’s construction of “the twelve apostles” has been so successful that we can hardly imagine early Christianity with them. But they are a fiction.

Peter is the leader of this group and takes a leading role in Acts. For example, he is the first one directed by a vision to go to the gentiles, not Paul. In Luke’s Gospel, Peter’s role is more muted. Luke operates with a three-stage view of history: the time of Israel, the time of Jesus, and finally the time of the church. The Gospel deals with the time of Jesus, while the Acts of the Apostles deals with the time of church. It is appropriate that Peter as leader of the twelve apostles comes to prominence in the first half of Acts, while Paul dominates the second half.

Luke’s Gospel introduces Peter early in the story. In Mark the calling of Peter and Andrew is quite simple. Jesus sees them fishing and says: “Follow me and I’ll have you fishing for people!” (Mark 1:19) In Luke this saying from Mark concludes an elaborate story of an extraordinarily large catch of fish that features Simon Peter alone (Luke 5:1-11). This sets Peter as apart from the twelve apostles from the beginning. Moreover, the calling of Peter follows upon Jesus’ inaugural sermon in the synagogue in Nazareth, thus highlighting Jesus’ preaching over the call of Peter.

The Gospel of Luke also protects Peter’s reputation. Peter’s confession of Jesus as the anointed occurs at the mid-point of Mark, but the story ends with a confrontation between Peter and Jesus. When Jesus warns them not to tell this to anyone, and moreover he is going to be crucified and rise up, this is too much for Peter. So he takes Jesus aside and lectures him. Jesus responds: “Get out of my sight, you Satan, you, because you’re not thinking in God’s terms, but in human terms.” (Mark 8:33) In the parallel passage in Luke (9:21-22) the confrontation and cursing of Peter is completely missing. The blackmark on Peter’s reputation disappears.

In Luke’s resurrection narrative, time begins to shift from the time of Jesus to the time of the church. Now Peter comes to prominence. After the apostles dismiss the witness of the women as nonsense (24:11), the story of the two disciples on the road to Emmaus follows (24:13-33), unique to Luke and almost certainly his creation. When the two disciples attempt to report to the eleven, before they can say a word, the eleven say, “The Master really has been raised, and has appeared to Simon!” (Luke 24:34)

The author has a problem. Peter, as leader of the twelve apostles, is supposed to be the first witness to the resurrection, but the author does not know a resurrection story of an appearance by Jesus to Peter. What he has is a confession or statement as evidenced in 1 Corinthians 15:5. So how does he solve this problem? By repeating the confession found in 1 Cor 15:5: “He has appeared to Simon.”

The Gospel of Mark provides the author of Luke with an empty tomb story which features three named women as heroes and Paul in 1 Cor 15:5-9 provides a list of appearances, beginning with Cephas (Peter), but without any stories about those appearances. That means that there are two resurrection traditions in the post 70 CE period: A list of appearances and a tradition associated with women coming to the tomb. The author of Luke follows Mark’s empty tomb story, but he must minimize the role of the women to place Peter in the preeminent role. He minimizes the women and frames Mary Magdalene specifically, by:

Diminishing the women’s role paves the way for the preeminence of Peter and the twelve apostles. Luke completely succeeded. That became the foundation for the myth of Christian origins.

By diminishing the role of the women, the Gospel of Luke begins the process of denigrating Mary Magdalene’s reputation until Pope Gregory proclaims her a prostitute.

It’s an old but tragic story. A woman must be smeared for a man to rise. How fragile is the male ego?

What do we know about the historical Mary Magdalene? Not much. Knowing anything about anybody from the ancient world always depends on what survives, which is very little. In the case of women, even less survives.

The earliest reference to Mary Magdalene is in Mark, where she is part of a group of three women. The fact that she is always at the head of the list indicates that she is a leader or prominent in the group. These women were followers of Jesus, just like the male followers. But unlike the men, they were erased from the tradition. That is really all we know historically.

The Fourth Gospel, late in the first century, is the first instance in which Mary Magdalene is alone, not one of a group. This is not historical but a narrative technique of the author. The Fourth Gospel likes dialogues, for example Nicodemus and the Woman at the Well. The Gospel of Mary, written early in the second century, also deals with Mary Magdalene as a single character, but again this gospel contributes nothing to our historical knowledge about Mary Magdalene.

In the Fourth Gospel Mary Magdalene announces the good news, “I have seen the Master,” to the disciples hiding in the upper room. In the Gospel of Mary, Mary is the one Jesus loved the most. But in Luke’s Gospel, the women, and especially Mary Magdalene, are diminished, and Peter is proclaimed to be the first one to see Jesus. These stories tell us nothing about the historical Mary Magdalene (or Peter), but they do tell us about her importance to some communities in the early second century. Mary Magdalene and Peter are the two characters through whom the communities of the anointed are arguing out the role of women in those communities.

This is part of a series of Bible and Beyond blog posts, podcasts, and videos dedicated to exploring the mysteries surrounding the extremely important but terribly misunderstood biblical character, Mary Magdalene. Click here to access more information about Mary Magdalene on the Early Christian Texts website.