Skip to content
How to Stop Worrying: The Biblical Remedy

Home » The Bible and Beyond » Blog » How to Stop Worrying: The Biblical Remedy

I have struggled with anxiety all of my life. During my first-ever parent-teacher conference in grade one, my teacher advised that I stop worrying so much. “Do not worry” is an instruction I have received since I was six years of age, yet, I still struggle to let worries go. The simple instruction makes it sound like something easy, like blowing on a dandelion clock in June, each seed lifting softly into and away through the air. However, nothing, for me, could be more difficult.

The gospels, too, challenge me not to worry, again, in seemingly simple terms. At the heart of Matthew’s Sermon on the Mount, Jesus’ public teaching on living justly, Jesus declares,

“Therefore I tell you, do not worry about your life, what you will eat or what you will drink, or about your body, what you will wear. Is not life more than food, and the body more than clothing? Look at the birds of the air; they neither sow nor reap nor gather into barns, and yet your heavenly Father feeds them. Are you not of more value than they? Can any of you by worrying add a single hour to your span of life? So why do you worry about clothing? Consider the lilies of the field, how they grow; they neither toil nor spin, yet I tell you, even Solomon in all his glory was not clothed like one of these. But if God so clothes the grass of the field, which is alive today and tomorrow is thrown into the oven, will he not much more clothe you – you of little faith?” (Matthew 6:25 – 30; NRSV).

My own inclination to anxiety has always made this passage difficult for me. But my own worries aside, how can we really be told not to worry, given the state of our world? Given all of the different forms of violence we are living through at home and abroad, given the growing insecurity of resources, given the worsening condition of our planet… is an instruction not to worry reasonable? Is it possible?

To whom is Jesus speaking here? Is this passage a simple statement about trusting in God’s providence, or is there a deeper meaning at work? Is the instruction meant to be a comfort, or a challenge (or both)?

The importance of clothing in Matthew’s Gospel

I came back to the Sermon on the Mount recently while rethinking some earlier research I had done on the different roles that clothing plays in the writings we have from the earliest Jesus peoples and groups. I have thought about clothing in Matthew’s Gospel before. Matthew 5:40 – 41 is a good example of the importance of clothing in Jesus’ teaching: when Jesus commands his disciples to give not just their tunic (a more appropriate translation of the common English “shirt”), but their cloak (rather than “coat”) as well, that is a bold ask.

The cloak was often the most expensive item belonging to a household, was required for social decency and acceptance, and was also used as much more than just a garment (it was also a covering at night, for instance). Giving away one’s cloak would have been extremely difficult, physically and socially. Our contemporary translations and contexts tend to lose the impact of this command. Giving away your cloak was an act of radical generosity.

I have always understood Jesus’ question, “Is not the body more than clothing?”, as having the obvious answer of, “well yes, of course.” When I looked into the realities of ancient clothing, however, I started to see how tied together clothing and the body – and beyond the body, the very stuff of self – really were, for Jesus’ audience. Clothing did make the person, in many ways. Clothing was not just a symbol of certain identities, but actually created these identities: gendered identities, ethnic identities, political identities.

Clothing created identities for everyone

Kings in particular were tied to their robes. Kings often gave clothing as political gifts in order to forge alliances, ensure loyalty, or bestow honour and power on individuals or groups. Kingly power was part of their robes, was in these robes somehow, and if a king lost or gave away his clothes, this loss was equivalent to the king giving away his power. Jonathan “binds his life” to David’s in 1 Samuel 18 through the giving of his robe; David cuts the hem of Saul’s cloak in 1 Samuel 24 and, in so doing, dissolves Saul’s authority as king.

Commentators and interpreters of Matthew 6 have always emphasized the flowers as the heart of the message, so much so that we have come to know this passage as “The lilies of the field.” What I have discovered by considering clothing, though, is that it is actually God’s act of giving clothing that is central.

When Jesus’ followers are told that God will clothe them with robes greater than one of the greatest kings of Israel, Jesus is saying that God will give the people power. Again, a king’s power was tied to his clothing. God’s gift of super-kingly robes is therefore a gift of power, a gift from the supreme, heavenly King. Jesus teaches that we should be confident in God’s role as our protector and as one who gives us power.

We are clothed in power

The statement that a common flower is better dressed than a great king is provocative too. The implication of this statement is clear: we should not place much store in earthly forms of power. True power comes from God, named in this teaching as our Father, our greatest benefactor. When we consider the audience of this teaching – people oppressed under empire, people trying to survive the precarious social and economic conditions of life under empire, conditions often violent – the gift of protection and power from God was the most important gift anyone could hope to receive.

This teaching becomes a challenge to Jesus’ audience to seek social protection and power in God’s alternative kingdom rather than in the realities of empire.

“Do not worry” takes on a much different meaning when we read Matthew 6 through the lens of ancient clothing. This command is not a general platitude, nor is it ignorant of the realities of life for the vast majority of our global communities, communities in which people struggle to put food on their tables and keep their children warm at night.

Rather, it is a statement that the power we all seek, in different ways and for different reasons – the power I try to exert over my own life, for example, when I am faced with certain worries – is not to be found through earthly means. Our true protection, our safety, comes from God alone. God will clothe us in a power greater than that of any sovereign the world could ever know.

Erin Vearncombe, PhD, contributor to Early Christian Texts, is an Assistant Professor in the Office of the Dean, Faculty of Arts and Science at the University of Toronto, Toronto, Ontario. She is a co-author of After Jesus Before Christianity and has published on the importance of everyday material objects in our interpretation of the writings of the early Jesus groups, with a special focus on clothing and dress. Find more of her work on academia.edu. 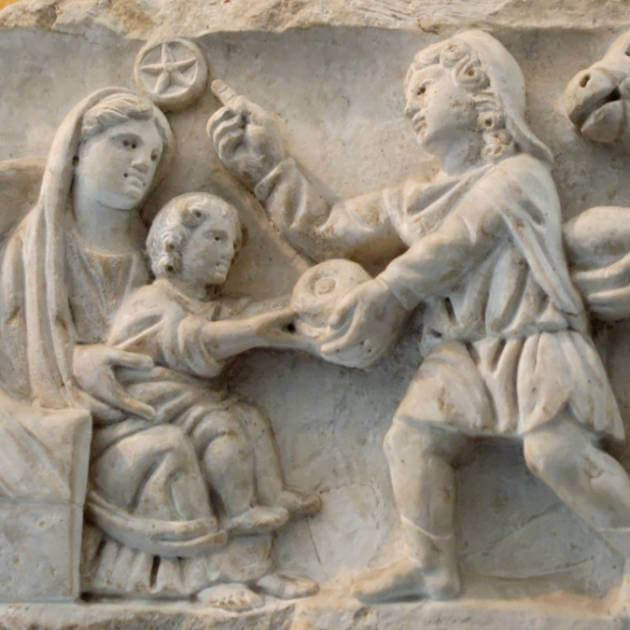