Home » The Bible and Beyond » Blog » Review of Mary and Early Christian Women: Hidden Leadership 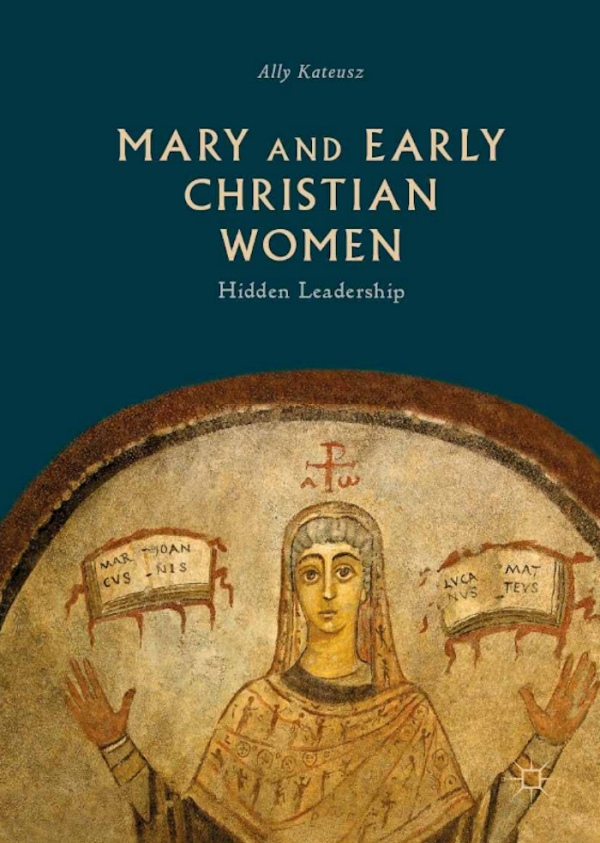 The birth of Mary and Early Christian Women took place, appropriately enough, over coffee in conversation among women. Dr. Ally Kateusz had been listening to her Hispanic friend’s tale of suffering from domestic violence when the subject of her priest’s teaching came up. “Be submissive, like the Virgin,” he had instructed her. Head bowed, with eyes down, she communicated between sips of coffee, and through words and posture, the impact of that lie in her life and in the lives of countless Christian girls. Kateusz wondered what difference it would make if priests taught girls to be like the Mary portrayed in the earliest Christian writings and art.

So she began to explore. Kateusz has discovered that, indeed, some early Christians described a very different Mary. One portrait of Jesus’ mother shows her upright, her gaze direct; after all, she was a liturgical leader in the early Jesus movement. Many other women were also known to have been apostles and official leaders. Striking examples throughout Kateusz’ book illustrate the Jesus movement as a community of gender equals, a notion that persisted into the sixth century.

Kateusz’ approach to her study (her methodology) is almost as important as the results of her research, because it opens up new channels of discovery beyond her own work. She used a redaction analysis—studying the changes in texts made over time by scribes either through shifts in theological views or by outright censorship. Studying these alterations in the ancient texts, Kateusz exposed a serious, long-held misinterpretation of many of them. She found other recent scholars agreeing with her that the old rule-of-thumb about the shortest reading being the preferred (or most historically accurate) one is no longer valid. With plenty of evidence that there were strong incentives behind the censorship, it was easy to demonstrate why longer texts (before censorship) would be the most reliable. Scholars from other fields will undoubtedly benefit from Kateusz’ numerous examples of the value of favoring the longest texts, a powerful means for re-envisioning the past

In her own research, the redaction analysis helped Kateusz expose specific textual and artistic alterations that have obscured evidence of early Christian women in leadership roles. From these changes, she was then able to analyze what was at stake in those changes. And from this analysis, she could demonstrate the specific ideological struggle over female gender roles that proceeded within church councils. What was at stake is almost immeasurable, including whether little girls would be taught that their model, the Virgin Mary, was submissive or was exercising authority. Boys who were to become priests (the teachers) would also be taught the altered image of a submissive Mary.

The direct path for Kateusz to the discovery of scribes’ censorship was created by her use of Dormition manuscripts. These texts, telling of the death (or “falling asleep”) of Mary, are particularly useful because the text of the oldest, largely complete Dormition manuscript is longer than the text of any other Dormition manuscript, and the large number of remaining manuscripts permits the viewing of changes as the manuscript passed through the hands of many scribes, translators, and copyists over time. For Catholics and scholars who may be more familiar with early church traditions, Kateusz’s explanation for her choice between the Dormition manuscript from the Six Books tradition, rather than the Palm tradition, is a good example of her patient and thorough scholarship. Throughout the book, she engages with both church tradition and contemporary scholarship, demonstrating her sensitivity toward both the academic and the religious issues at stake and revealing how she was able to follow the long and complicated redaction histories.

Despite her attention to minute details in both artwork and text redactions, she also demonstrates the merits of a macro-historical approach. Since books and small pieces of art were easily transported around the Mediterranean area in late antiquity, Kateusz was able to detect repeating patterns among the Jesus movements of earlier times: 1) that there was a powerful female gender role modeled by his mother during the earlier layer of the Jesus movement; 2) that women who were called apostles evangelized, preached, baptized, and performed exorcisms; and 3) that women who presided at the table were called president, bishop, priest, presbyter, deacon, and minister.

The stories Kateusz has woven together of specific women—in addition to Mary—who accomplished all these things present a much larger image of Biblical times for those who know the stories only from reading the canonical Bible (which was compiled centuries after the events). Her accounts of four amazing women apostles—Mariamne, Irene, Nino, and Thecla—read almost like the Marvel superheroines of the twenty-first century who accomplish just as much as their male counterparts!

Irene was an apostle who proclaimed herself a bride of Christ. She broke idols, exorcized a demon from her city, prayed, raised the dead (her father), performed miracles and cures, taught, and baptized those in her city. Mariamne, also called an apostle, was sent out to evangelize but was later sexually slandered.

In the longer account of Nino, another apostle, she was described as having baptized forty women on her way to Iberia, where she ultimately preached and baptized several tribes as well as their queen; but in the shorter (probably censored) version, male clerics baptized all the people Nino had converted.

And finally, in the longer version of Thecla’s story, Paul instructed her to go teach (“catechize”) the word of God and baptize her converts; but the shorter version tells us simply that Paul told her to go and teach. The fact that Tertullian, an extremely influential Church Father, complained about Thecla giving women a license to baptize probably indicates that, in fact, she did baptize, as the longer account reports. 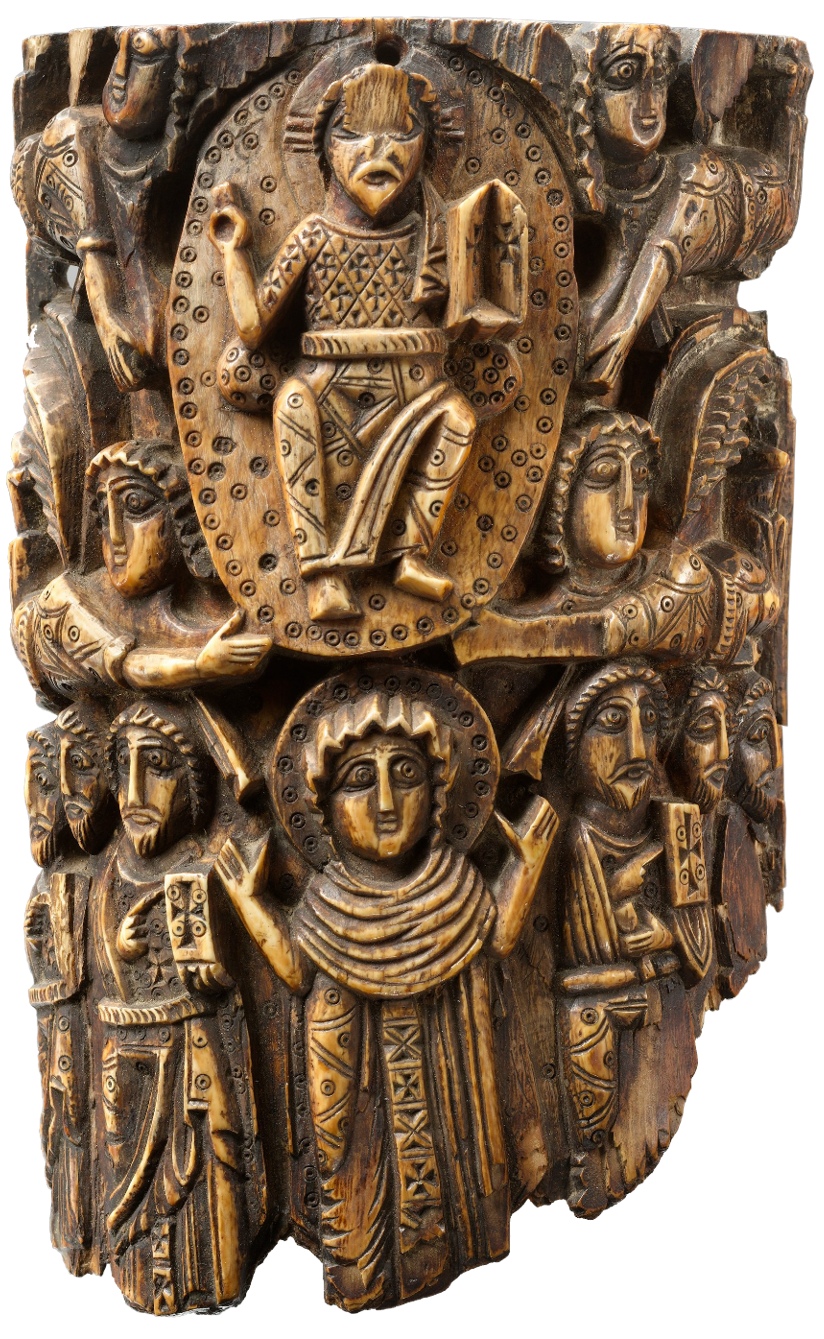 “Tusk Fragment with the Ascension” showing Mary as bishop of bishops. Ivory icon from Egypt or Palestine, dated 720 to 970. In the collection of the Metropolitan Museum of Art. Shared under a CC0 License (image in the public domain).

The amplitude of the images of the mother of Jesus in texts and artistic portrayals tells an even larger story. One of the most startling images for readers of the biblical book 1 Timothy, is a scene Kateusz elaborates on from the Six Books. Mary (the mother of Jesus) is about to die. The twelve male apostles (the original eleven plus Paul) have returned from their missions to gather around Mary, and she has lifted her hands in prayer. Everything about the scene contradicts the rules set forth in 1 Timothy, which Kateusz identifies as a letter from faux-Paul. Evidence points to the historical Timothy and Paul as having appointed women leaders, indicating the intentions of the faux-Paul to discredit Paul’s real relationship with women in ministry. In this scene from the Six Books, Mary is portrayed as the liturgical leader of the male apostles, “essentially serving as the high priest of the men in the line of apostolic succession, that is serving as the bishop of bishops” (p. 69). This specific scene is also preserved artistically in the Rabbula Gospels illumination. (See accompanying photo, figure 4.1, p. 72 of the book.)

In two other major themes of the book, Kateusz demonstrates the frequent pairing of Mary and her son, Jesus, and the gender-parallel depictions of men and women at the last supper. Surprisingly, the images of Jesus with his mother—not counting those with Jesus as an infant on her lap—greatly outnumber the images of Jesus alone. They are either paired as equals, as in the sixth-century ivory Etchmaidzin Gospel covers (p. 109), or with Mary serving as chief officiant of the Eucharist with Jesus above her, as in a mosaic at the San Venantius Chapel, Lateran Baptistery, Rome (p. 87). Significantly, artists and authors alike envisioned Mary as present during all the important events of Jesus’ life, including his baptism and last supper.

Several attributes place Mary and Early Christian Women on a list of contemporary influential books (besides its contribution to scholarly methodology already mentioned). As a collection of early Christian art, it provides a rare look at depictions of women portrayed at the highest levels of authority before conciliar Christianity. As a collection of overlooked longer texts, it tells stories that had been censored and had become lost. As a compilation of accounts of women’s accomplishments in painting and words that had been buried or lost, it adds historical knowledge to early Christian scholarship.

By exposing the intentional scribal activity associated with the redaction of the markers of female religious authority, the attempt to erase the memory of powerful historical women has weakened. Kateusz concludes, “Censorship is seldom complete. Draw together all the perceived outliers in the data. What pattern do they create” (p. 189)? With all the evidence now presented, “no church can exclude women from its leadership and remain true to its origins” (p. 190). True to her promise, Kateusz’ research is for the benefit of little girls.